L:  What are these two images and why are they spinning together?
D: Each one is part of a photo album. One is a picture of me as a child at the beach. The other one is from my father’s war album, the album he brought from Guiné-Bissau when he returned from the war in 1974. I found it hidden behind a picture of him with a couple of other Portuguese soldiers. I knew this image of him with the other soldiers in the album very well. But one day I realized there was a suspicious additional thickness behind it that made me open the plastic layer and pull it out. This is how I found the image I’m using here.

L: Can you describe this image?
D: It’s a black and white photograph of a young man beaten to death. He is lying on the floor, the belly uncovered, the t-shirt chaotically pulled up, his face broken by the brutal violence, his left arm randomly still, blood everywhere. I think I was 10 when I saw it for the first time and the explosion of emotions caused by the confrontation with that image was immediately swallowed in silence. I kept silent.

L: So exhibiting these two images today is about battling that silence.
D: I still don’t understand if I decided to keep this image with me or if it decided to stay with me. I guess I’m trying to formulate my relation with it.

L: There’s an animist touch in what you say. As if this photograph through its’ violence had a specific power. That it chose you as much as you chose it.
D: What I mean is that I didn’t choose to see it. I just saw it and that’s it. It’s an irreversible event in my life that conditioned my perspective on what an image is and then on everything that as to do with colonial history in general. The fact is that we stayed together until today.

L: In a way you mean that this image is part of your own personal and political historicity.
D: In other words, it inscribed itself on my body like an invisible tattoo. Like an image impregnated in my flesh, circulating in my veins.

L: It nearly sounds like it’s part of your own biology, a part of your DNA, a political DNA.
D: Yes, even though you almost never see it whenever you look at or feel about yourself, it is within you and you are under its’ influence since the day of that first gaze. But when you become aware of this, what is it exactly that stays in you  – the vision of that death? or something of that dead man himself?

L: I don’t really follow you. Is it possible that the existence of this image is not only a consequence of this man’s death but somehow an inclusive part of his murderer?
D: As an adult I asked again my father about the history of this image. He told me that it was the kind of image that used to circulate among soldiers, some kind of war pornographic imagery that was used to challenge the newcomers. So, in the context of the colonial war, this image was sold to young soldiers as to challenge their own existence as part of a community through the visual circulation of violence. Through the contamination of the gaze since the first moment they arrived.

L: So, you first grew up with the idea in the back of your head that your father may have taken part in the murderer of this man.
D: In the back of my head, yes…

L: Therefore, thinking that the conditions that annihilated him were the same that created you and that you were part of one same chronology of appearances and disappearances.
D: That the victim and the aggressor always coexist in you. That you are both.

L: What is this sound?
D: It’s the spinning of different metallic broken objects around my head. A slinger without the shot. 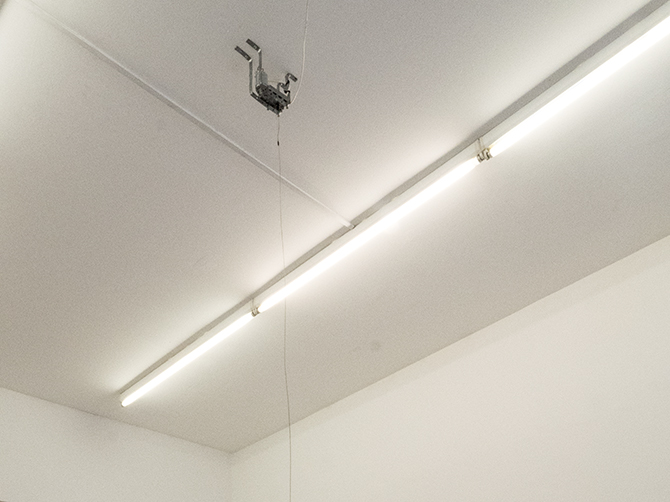 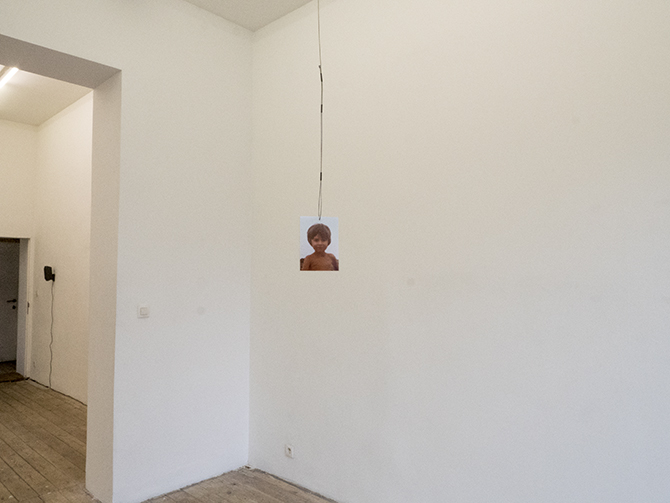